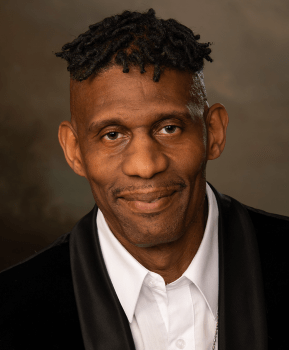 The June Reid Health Ambassador spent months walking to and from a job that also involves tons of walking -- until his supervisor and coworkers raised funds to help him get a vehicle, plates and even insurance.

"I'm thankful, and I'm humbled," said Kevin Perkins, a member of the transporter team that interacts with patients in helping get them to tests, appointments, their rooms and to the door when they are discharged. His works days are filled with interactions with patients and families as he makes thousands of steps all over the main campus.

Perkins' nominators cited his thankful, positive attitude and his rapport with patients in nominating him for the recognition. "Kevin puts everything he has into his work every single day and does so with enthusiasm that is hard to match," said a nominator. "He has a contagious smile and personality that hits you like a wave when he walks by you in the hall."

Another said "you can tell he enjoys his job, and he is inspiring to be around." Others said he "does everything in his power to make the patient's day a little bit better."

Perkins is a Richmond native, joining the Reid Health team two years ago in Environmental Services. He had previously worked as a behavioral specialist at a youth home. Last year, when his supervisor and coworkers found out he didn't have transportation, they created a funding page and raised at least $6,000 to help him buy one. "It was a Reid team effort," said Jess Richie, Perkins' supervisor.

Perkins found the gesture quite humbling, but was not surprised by the generosity. He says he found his perfect fit when moving to Central Transport about a year ago. "I think this was a job that fit," he said. His outgoing personality, smile and tendency to wave to others is so well-known by his coworkers on campus.

He has seven grown children. When not working, he likes to participate in outdoor activities such as biking, fishing and camping.

"It's more than a job if you enjoy what you do," Perkins said. "I tell people I'm happy to see them, just not under these conditions," he said - and he especially enjoys when he is helping them to the door when they get to go home. "They say, 'I'm thankful for the care here, but I'm ready to go.' You can see it on their face."