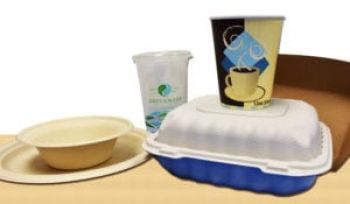 These new containers in the Cafe at Twelve Hundred include some made of a combination of potato or cornstarch polymers and other environmentally friendly materials.

The Reid Health Café at Twelve Hundred already known for efforts to be environmentally friendly is now even "greener."

The café recently replaced plastic and polystyrene foam products with more sustainable and "compostable" goods. The effort will eliminate the use of more than a million foam cups half a million foam bowls and plates and almost 150000 take-out containers used annually in the café. "The new wares utilize less energy and water during manufacturing than the alternatives and do not release toxic residues into the soil during composition" says Kris Ankeny director of Food & Nutrition Services at Reid Health.

"Compostables" is a term that is regulated by the American Society of Testing and Materials and is defined as a manufactured item that can degrade within 90 days into organic and inorganic materials without releasing toxic residues during the process Ankeny says.

The new products being used in the café include cups that look to be plastic but are made of a combination of potato or cornstarch polymers wheat straw sugarcane recycled paper and other plant-based resins. "These products which are virtually nontoxic upon decomposition offer a significantly reduced degradation timeframe than their traditional counterparts and thus impose a negligible burden on local landfills."

Ankeny noted the following about some of the traditional materials and their decomposition rates:

The compostable products are starkly better:

"The sustainable changes made by Reid Health seek to preserve the integrity of tomorrow now by eliminating waste that could ultimately disrupt the lives of the Reid community" Ankeny says.

The latest change is the newest of several recycling and sustainability efforts implemented by the Food & Nutrition Services department. The department participates in a Food Rescue program that reduces waste and contributes to a reduction in community food insecurity; collects plastic bottle caps in a partnership with Cope Environmental Center that recycles the plastic into other uses; and will soon offer a re-usable lidded cup and straw which will continue to reduce single-use items.