What is a stinger? Discover everything you need to know about this common but relatively unknown sports injury

What is a stinger? If you have a child who plays contact sports you should know. It’s usually not a serious injury but it’s important to be able to recognize one and know what to do.

What is a stinger?

Moves that jar the body suddenly (e.g. an improper tackle in football) can cause stingers according to the University of Rochester Medical Center. Stingers happen when the head moves quickly to one side the shoulder and head move in opposite directions or there is a direct hit to the area just above the collarbone. A stinger is caused by the compression of a spinal nerve in the neck.

A stinger (also called a burner) can cause intense pain in the neck and shoulder and the arm usually goes numb according to the Nemours Foundation. The sensation has been likened to an electric shock down your arm. The symptoms usually disappear after a minute or two.

How are stingers treated? 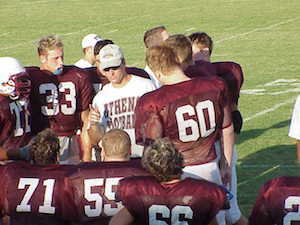 Most stingers don’t need to be treated by a physician but Nemours recommends that you check in with your doctor if:

You should also call your doctor if you see concussion symptoms or if there is a history of stingers.

Your doctor may order imaging tests such as an MRI or X-ray to rule out a more serious condition. They will recommend that your child does not return to sports activity until their symptoms are completely gone says the American Academy of Orthopedic Surgeons.

Nemours recommends applying ice to the injury for 20 minutes every two to three hours for two days after the injury as well as administering anti-inflammatory medication as needed.

How can stingers be prevented?

URMC says the best prevention is reviewing technique and equipment to ensure your child is as protected from injury as possible. You may also want to look into confirming and addressing any muscular or postural problems. Nemours recommends that athletes keep their neck and shoulder muscles strong and flexible incorporating gentle stretching prior to playing sports.

If your child has had a previous stinger special protective gear may help prevent a recurrence.