The link between Parkinson’s and boxing: Fighting off symptoms

For people with Parkinson's disease a regimen of jab, cross, and hook may help stave off symptoms. Boxing classes specifically for boxers with Parkinson's are gaining momentum across the country. But what happens when Parkinson's and boxing face off in the ring?

The disease is characterized by tremors, a shuffling walk, loss of balance, slowed movements, a softened voice, and cognitive changes along with many other symptoms.

There's no cure for Parkinson's and treatments are tailored to manage individual symptoms. However, vigorous exercise may have a protective effect on the brain and help slow the disease's progression, according to research in the journal Neurology.

How are Parkinson's and boxing related? 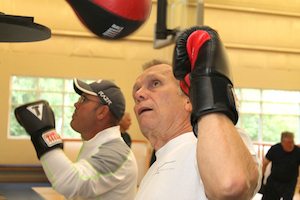 Research is limited, but boxers and their caregivers have noticed major improvements in their symptoms. One particular boxer, Richard Ross (click to read Richard's story), started off with tremors, a shuffling gait, and sleeping problems; however, after consistent attendance he is feeling stronger, more flexible, and more confident. The classes also offer a chance for caregivers to connect and feel supported.

Emerging case studies support this idea. A small study followed a few boxers in the Rock Steady Boxing Foundation. The results published in Physical Therapy found that all boxers who followed through on 12 weeks of training saw improvements in their symptoms. The study tracked balance, gait, quality of life, and disability.

Those who stuck with the training for 24 or even 36 weeks saw sustained improvement in their symptoms. Even boxers who worked out less often after the initial 12 weeks continued to improve. Participants with moderate to severe Parkinson's took a little longer than those with milder symptoms to see changes, but their dedication paid off a few weeks later.

Rock Steady Boxing in Indianapolis pioneered the idea of combining Parkinson's and boxing for a therapeutic and motivational workout. Reid Health was the first hospital affiliate for Rock Steady Boxing and the model has since been adopted at many gyms throughout the country.

Interested participants will have an initial assessment and then join the appropriate class level. Classes are set up based on Hoehn and Yahr levels of functioning. Hoehn and Yahr is a rating scale that assesses the severity of people's symptoms and how much assistance they need. The boxing classes are tailored to the abilities of the boxers in each class.

When participants arrive to class they are introduced to a range of drills and exercises. Boxers can do combinations with a speed bag or heavy bag, spar with the instructor, or even jump rope. The classes combine traditional boxing drills in and out of the ring with weight-training, core work, stretching, and calisthenics to work the body and mind.

All classes are non-contact. An instructor wears pads and focus mitts for any sparring exercises, but boxers don't spar with each other.

The classes offer great exercise, camaraderie, and hope. If you're interested in watching or joining a class at Reid Health, check out Reid Rock Steady Boxing or call 765-983-3092 to schedule an assessment.