Know the signs of concussion to protect your young athlete

Do you know the signs of concussion? With the fall athletic season about to begin players and spectators alike are more concerned about the fun of the game rather than the risk of injury on the field but it's important to be prepared should an emergency present itself. If you are able to determine the signs of a concussion your child and his or her team as a whole will benefit from your knowledge. Injured players can get treatment sooner and have a successful recovery if there are concussion protocols in place.

What you need to know about concussions

A concussion is a brain injury resulting from a blow to the head and is responsible for nearly 9 percent of all high school athletic injuries and 40 percent of sports injuries in children aged 8 to 13 according to statistics compiled by the American Academy of Pediatrics (AAP).

The AAP maintains concussion is one of the most dangerous injuries because of children's developing brains and the possibility of short-term and long-term symptoms that can interfere with school social life and family relationships as well as further sports participation.

When participating in the same sports statistics show that girls have a higher rate of concussion than boys for unknown reasons. Concussion in boys is possibly underestimated because boys are more likely to downplay or not report their injuries or symptoms fearing removal from the game. Unsurprisingly the boys' sport with the highest concussion risk is football and for girls concussion rates are highest in girls' soccer and girls' basketball according to the AAP.

What to do about a concussion

If a child suffers a head blow during practice or a game play should be stopped and the child should be evaluated on the spot by coaches. The AAP advises following the lead of Washington state which passed the Zackery Lystedt Law in 2009. This law requires young athletes to be removed from any game if a concussion is suspected and not to return to play until receiving clearance from a licensed health care provider.

You should monitor your child for several hours after the injury to look for any deteriorating behavior or condition. The AAP urges you to take your child to the emergency room if you notice the following symptoms: vomiting severe or worsening headache seizures unsteady gait slurred speech weakness or numbness in the extremities unusual behavior diminished mental acuity or signs of a skull fracture.

If a concussion is identified follow all medication recommendations by your health care provider as well as all other activity restrictions. Physical exertion including simple regular walking and cognitive exertion such schoolwork reading playing video games using a computer and watching television may worsen symptoms and slow recovery according to the AAP.

Symptoms and signs of concussion 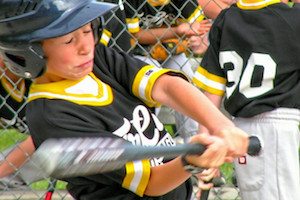 All children respond differently to blows to the head so you must know your child's normal tendencies in order to identify any irregularities in behavior or mood. Whether you witnessed the injury firsthand or learned about it after the fact keep a keen eye for signs of concussion.

The AAP reports that the signs of a concussion are similar to those of depression anxiety and attention-deficit disorders so you are looking for symptoms and behavior that are out of the ordinary or that have changed especially after a known blow to the head or face.

Here are the most common symptoms of a concussion according to the AAP which can appear days or weeks after the accident and last about a week or last even seven to 10 days longer in athletes under age 14:

Be careful of your child returning to play too soon. If he or she sustains another bump or blow before the brain fully heals the additional damage may result in longer-lasting symptoms permanent mental and physical disabilities or even death. Continued use of medication to relieve symptoms and continued signs of concussion during and after physical exertion are signs that it is too soon to return to play.

Head over the CDC's HEADSUP program where you can print out concussion fact sheets and parent/student concussion contracts you can share.