If you have children you're probably familiar with some ear infection symptoms. Ear infections are the most common reason kids visit the doctor according to the National Institute on Deafness and Other Communication Disorders (NIDCD).

Most ear infections are not serious and resolve on their own or with antibiotics but it is important to stay vigilant. As NIDCD notes ear infections occur when fluid builds up in the eardrum and the American Academy of Pediatrics points out that fluid accumulation can cause hearing loss as sometimes the fluid does not drain after an ear infection.

What causes a middle ear infection?

A middle ear infection typically arises from bacteria. Fluid builds up behind the eardrum and the middle ear becomes inflamed. NIDCD explains that children especially younger children are more prone to ear infections because they have shorter more horizontal Eustachian tubes (the part of the inner ear that drains fluid from the ear down the throat) and a child's immune system is still developing so it's harder for them to fight infections. Since a lot of bacteria passes through a child's nose and mouth it can get caught in their adenoids (part of the immune system) in the back of their throat and cause chronic infection that can pass up through the Eustachian tubes and into the middle ear.

Know the symptoms of an ear infection 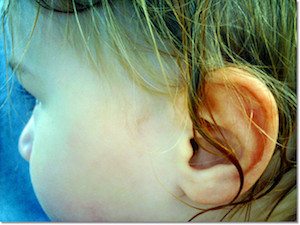 According to NIDCD while pain and a fever are two common symptoms of a middle ear infection in both adults and children your child especially one under a year old often can't tell you their ear hurts. Instead younger toddlers and babies may pull at their ear or they may cry more or wake more often during the night. They may seem clumsy or have trouble balancing or you may notice they can't hear as well. You may even see some fluid draining from one or both ears.

If the doctor is able to rule out all other likely possibilities they'll probably prescribe antibiotics to clear the infection as NIDCD notes. They may also recommend over-the-counter pain relief. Otherwise if your child is over two and isn't running a fever or in severe pain they might have you wait a couple days to see if the irritation doesn't just go away on its own.

How you can help your child avoid ear infections

The simplest day-to-day way to prevent ear infections is to be sure your child washes their hands often as NIDCD advises. Keep current with your child's vaccinations and take care to keep them from playing with their friends when they're sick. Never put a baby down with a bottle even for a nap and don't expose them to cigarette smoke. Ear infections may not always be serious but they certainly are uncomfortable. Take preventative measures and learn these ear infection symptoms to keep your little ones healthy and happy.